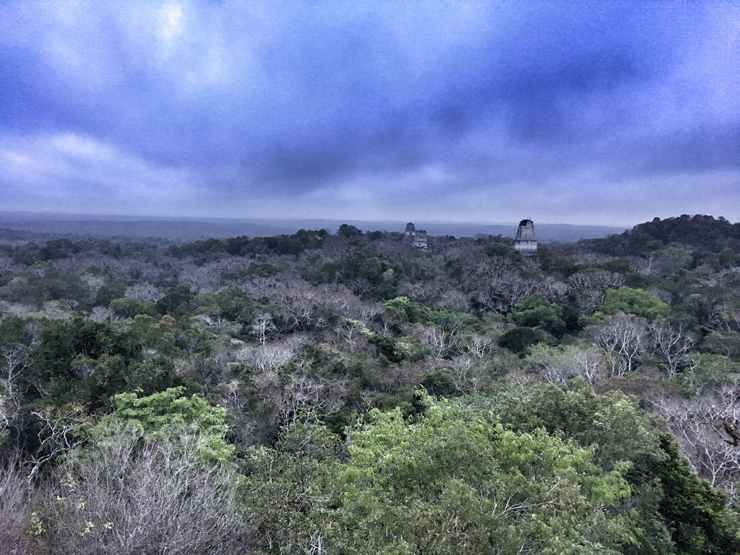 Fumbling through the darkness, my eyes searching the small pool of light radiating from the torch strapped to my bag, concentrating hard, I tried to keep up with our guide. It was 4:30am on a humid and increasingly warm spring morning and he was expertly and speedily navigating through the Guatemalan jungle with 20 or so sleepy tourists following in his wake.

After only 2.5 hours of sleep, an hour minibus ride and a gallon of insect repellent, I was finally fulfilling my dream of seeing Tikal at sunrise.

The ancient Mayan city of Tikal is buried deep in the jungle that is in the Peten Province in Eastern Guatemala near the bored with Belize. Tikal boats thousands of Mayan ruins and monuments but is famed for its temples and pyramids. The biggest of which, Temple IV, is over 70 meters high and is the tallest ancient building in Central America. Today we were to conquer Temple IV and witness the spectacular sunrise over this expansive ancient kingdom.

Feeling slightly smug as we stumbled through the jungle, I was one of the only people who brought a torch. Knowing me I’d have twisted my ankle two minutes into the trek and since it was pitch black, no one would have noticed that I was missing until daylight broke. My foresight made me an instant hit with others who hadn’t brought anything. Including a man on crutches. Yes you read that correctly. Tikal is such a must see destination in Guatemala that people will trek to see it even if they can’t technically walk.

As we hiked deeper into the jungle, it was as though someone had been slowly turning up the dials for light, temperature and volume. We rounded a corner and suddenly, towering ahead loomed Temple IV and its giant wooden staircase. As one of the first people to reach the top of rickety wooden structure I was rewarded with an unobscured view of the temples (I, II and III) beyond peering out of the canopy. Star Wars fans may recognise this as the view from the Moon Yavin 4 rebel base in Star Wars Episode IV: A New Hope! The View from Temple IV before Sunrise

We all took our seats on the steps of the summit platform, eagerly awaiting the moment that the sun would burst up through the clouds. It was almost as if we were sat in a cinema: the best seats in the house to one of nature’s most spectacular events. Spectators sunrise watching from the summit of Temple IV of Tikal

The morning light began to illuminate the scene sprawling out below. We sat in a hushed silence – mainly due to the hike leaving us all breathless – then the expectant atmosphere started to fade. Photos had been taken and most had reverted to long meaningful stares into the distance, willing the sun to make her appearance. Temple III with Temples I and II beyond

Then our guide materialised. It was light now. We’d missed that most epic moment because the sky was too cloudy. Just my luck. However, the view itself was worth the journey. Making our way back down the stairs, at a much more leisurely pace, we all assembled to resume our tour.

There is so much to tell you about my experience at Tikal during daylight hours, so check back later this week… 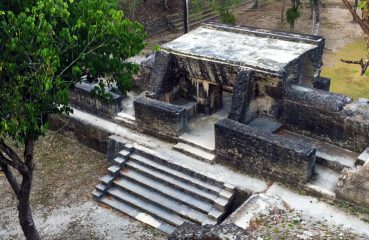 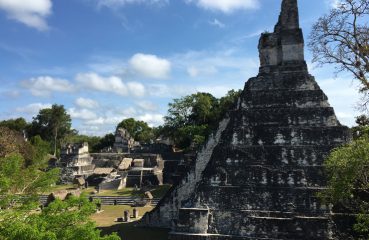 16 Responses to :
Hiking Tikal for Sunrise