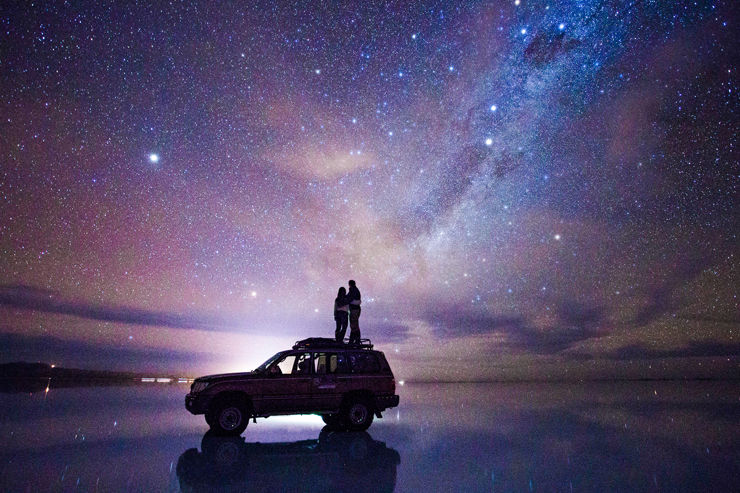 People associate the Bolivian Salt flats as a bright, crystal white moonscape that provides tourists with fun photo ops. Obviously, this isn’t wrong and quite frankly we couldn’t resist. Standing at 3656 meters above sea level, with its dry air, no precipitation from April to November and being almost completely uninhabited, the salt flat provides the perfect setting for stargazing.

We took a walk down the tourist strip in Uyuni to do a little window shopping. Uyuni is the small town located on the edge of the salt flats that acts as a tourist jumping off point for salt flat trips. The town is predominantly made up of hotels, pizza parlours and travel agencies. Most of the agencies line the town’s central road and compete for tourists’ dollars.

We bartered our way down the streets and eventually settled on a small travel agent who seemed to specialise in South Korean tours for our stargazing trip. After filling up on standardised Uyuni pizza we returned to our Korean tour meeting point at 4pm and met our fellow stargazers who were a mix of Chinese and Taiwanese travellers.

Snuggled up in a road weary 4×4, we set off into the flats. The ground underneath us turned from dusty sand to crunchy salt as we went further and further off road. We passed several other off-road vehicles going the other way, taking their travellers back to Uyuni for the last flights out of town. 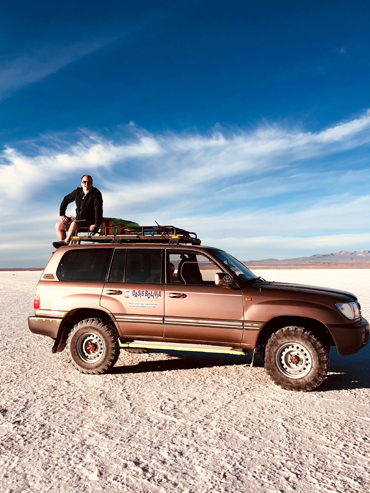 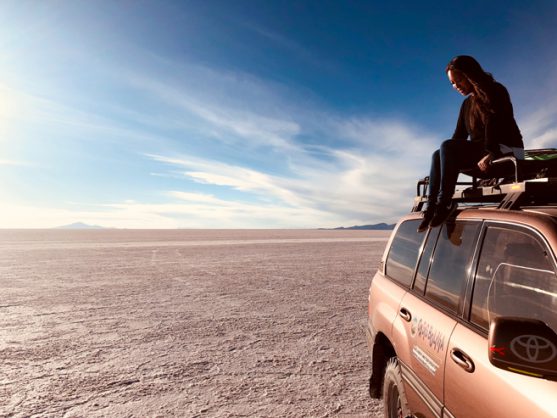 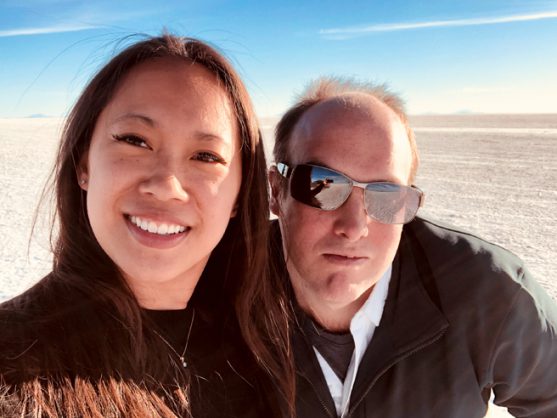 Once the dust and sand were behind us and we were truly in the middle of a seemingly never-ending moonscape of salt, salt and salt… we stopped for the obligatory comedy photo shoot involving oversized dinosaurs and a Pringles tin: 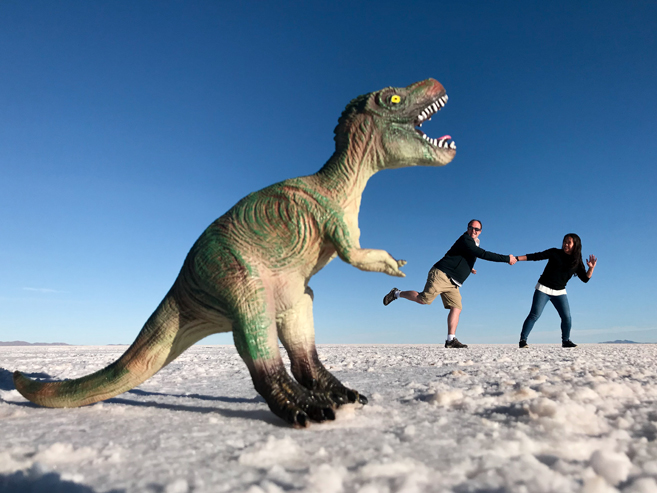 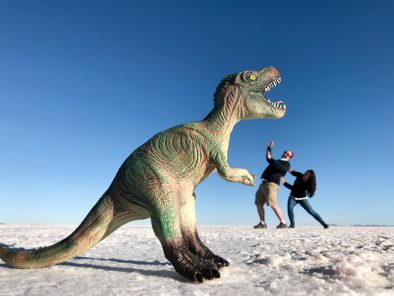 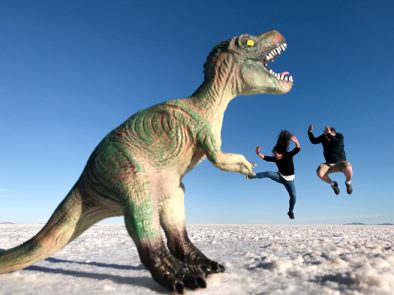 As the sun started to fall we headed back into our vehicle to get to the main event: the flooded plains. The salt flats are over 4000 square miles in size and only vary in altitude by 1 meter. Basically, they’re incredibly flat. 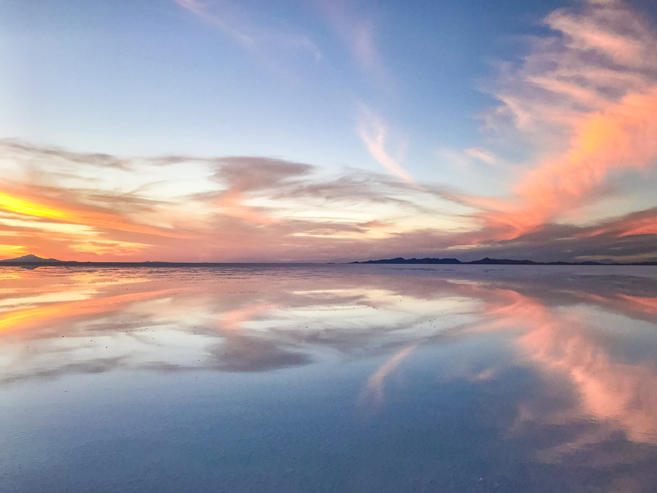 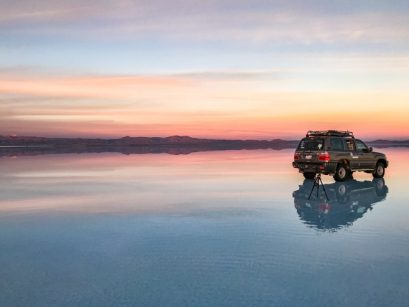 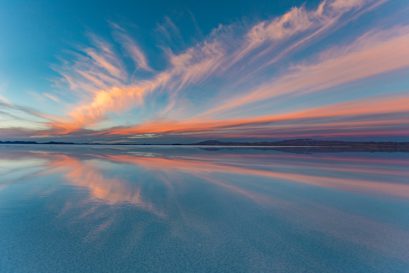 During the rainy season from November to April the flats flood. The water, with it’s salt backing becomes a giant mirror offering a perfect reflection of the sky and anything that stands on it.

We visited the flats in May and luckily there were still some areas that were flooded and displayed this incredible spectacle. There were also some clouds hanging around in the sky to give our mirror something to reflect and our sunset something to light up.

Armed with the provided wellies and a burning desire to Instagram our lives, we jumped into the shallow waters to take in our sunset. 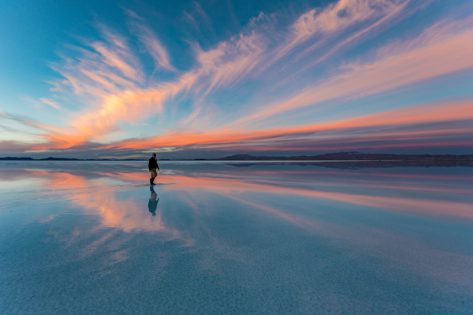 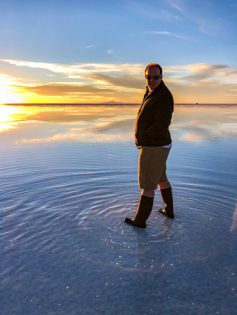 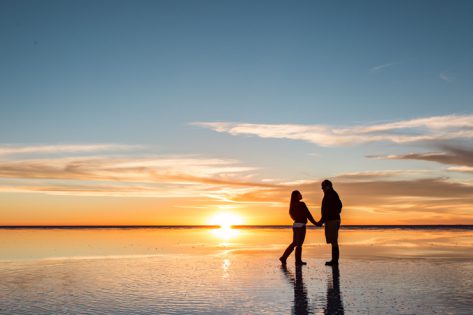 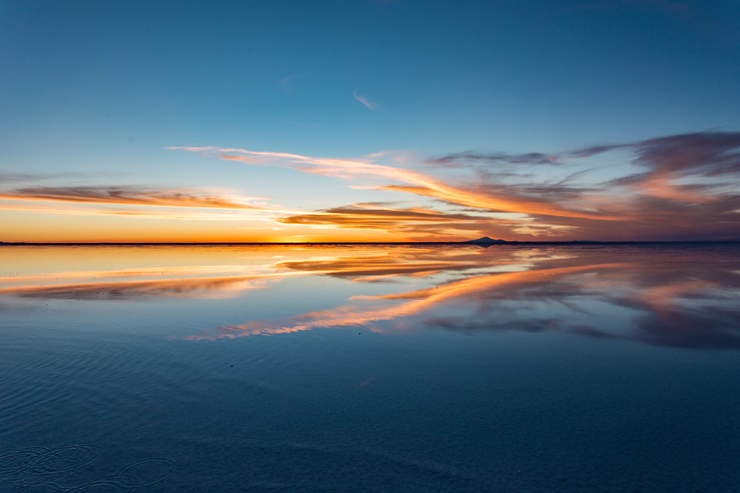 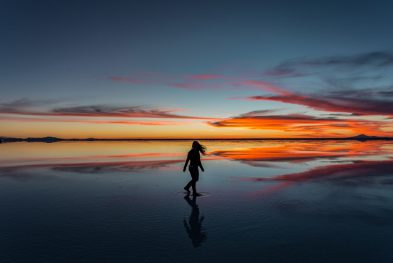 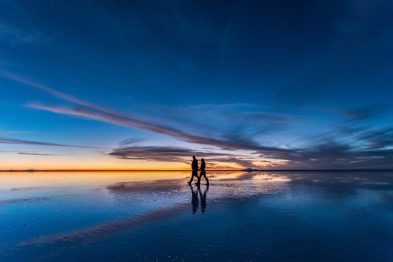 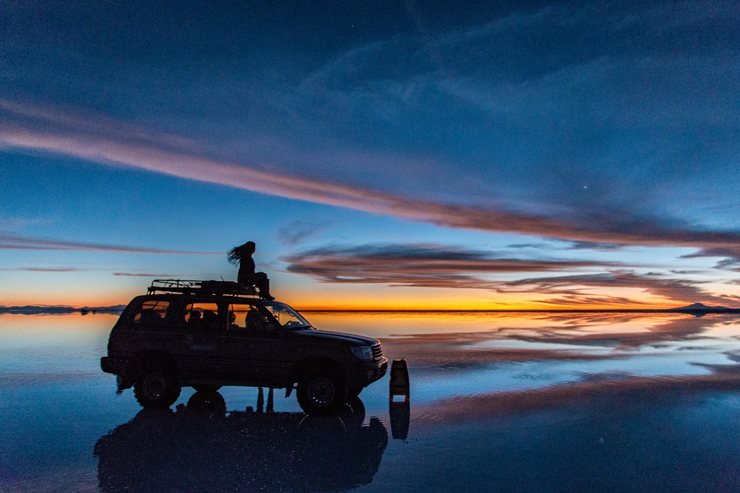 Once the fire in the sky had burnt out, the darkness slowly enveloped and the temperature dropped. Thankfully we’d brought our warmest clothes, but after the euphoria of the double sunset, a palatable sadness seemed to hang in the air.

But not for long. Soon faint glints of light started to prick and poke their way through the darkening curtain of the night sky. The faint lights grew louder and sharper and were followed by more and more faint lights around them.

Over the next hour the sky itself became pure black and when you joined up the faint lights, you could finally see it: The milky way. It hung over us like a giant arch and over the course of the night moved from just over the horizon to directly above us. Had we stayed out the full night, it would have completed it journey across the skies and gone to bed under the far horizon.

As testament to how beautiful it was, the temperature was probably well below zero but no one on the trip really noticed or cared.

There are plenty of 2, 3 and 4-day trips out to the Bolivia Salt Flats available from Uyuni, but in one night we had seen and experienced everything we could have wanted from the salt flats, Bolivia and maybe even our entire trip to South America. 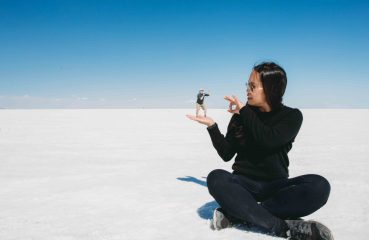 The great plains of Bolivia’s Salar de Uyuni are otherworldly. They are also of course, a pretty popular tourist destination. The nearby town of Uyuni serves... 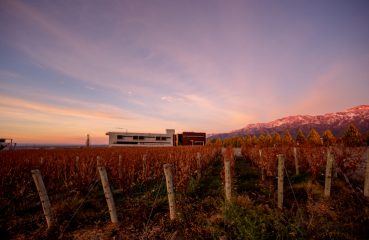 Casa de Uco is a high-end luxury wine experience in Mendoza. The private estate is a hotel, bodega (winery) and restaurant that includes a full spa and Andean activities including...

16 Responses to :
Stargazing on the Salar de Uyuni