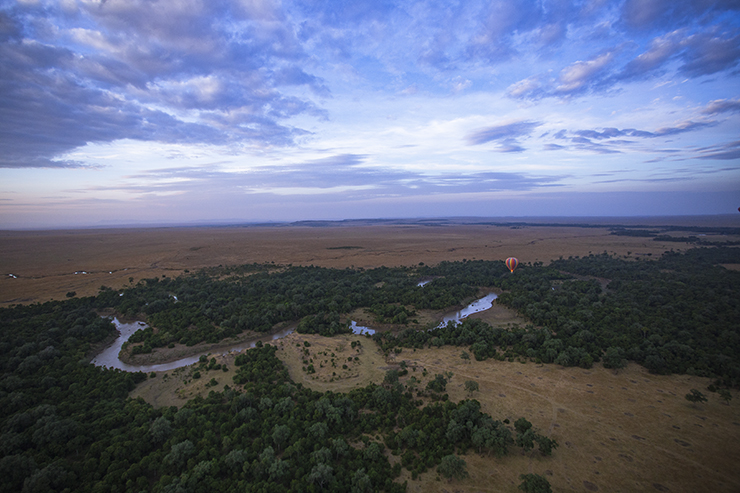 Being woken at 2:30am is always disorientating. Being woken by a Masai warrior doesn’t help the situation. Climbing into a giant wicker basket under an enormous balloon on top of the biggest flame-thrower you’ve ever seen almost blew all our senses.

At first the heat was almost unbearable but it was soon forgotten. The morning air was still but the ground staff were a constant flurry of activity around us.  The crowd waited in silent anticipation.

As the light spread over the horizon transforming the sky from a velvety black to a deep sapphire blue we started to rise. Slowly at first and surprisingly smoothly we ascended towards the clouds. Ahead of us two other silk balloons had already risen from the Governor’s Balloon Safaris launch site and disappeared beyond the trees.

Waking for the day at 2:30am would be enough to make anyone’s eyes water, but we were soon bumping along the plains of the Masai Mara in our pre-heated jeep. On our journey from Julia’s River Camp we were treated to a ‘night’ game drive stopping to see the elusive nocturnal animals in action. Jackals and packs of hyena watched us drive past, confused as to why the jeeps were out before dawn.

Once at Little Governor’s Camp, we boarded a small boat reminiscent of the ferry to the underworld (but exciting not morbid) to cross the crocodile inhabited great Mara River. The view of the river crossing in daylight

After checking in and going through security, the safety briefing with our pilot, Captain David, began. Being in such close proximity to the huge balloons lain out on the ground, I started to get nervous. How could something so flimsy bear the weight of SO many people? I took comfort in the fact that Governors Balloon Safaris have been flying over the Masai Mara for over 40 years and their safety record is unmatched.

The balloons used by Governor’s Balloon Safaris are constructed and imported from Australia, their pilots are recruited from all over the world, the balloons are reinforced to withstand the jagged terrain of the Masai Mara and the baskets are fortified with Kevlar! We’d highly recommend flying with Governor’s Balloon Safaris as a balloon ride over crocodile infested waters is something that you don’t want to go wrong! My fears subsided as the huge fans started to inflate the balloons. The ground crew assigned to each balloon was very efficient and soon the burners were belching out flames and the balloons started to rise from their sleepy state. The basket was taller than I imagined and hard to climb into, but thinking about it, that’s a good thing! After practicing our landing positions in preparation and being warned about hitting termite mounds, Captain David fired up the burners. Rising so smoothly and silently, it was difficult to pinpoint when we left the earth. The fire above our heads and soft wind provided the only noise as we watched the buildings shrink below us. We cleared the edge of the trees as the sun’s rays started to warm the sky. Captain David spun the balloon round 360 degrees to get a full panoramic view. It was astonishing how much control he had, since I previously thought that we’d just go up and once there be completely dependant on the will of the wind. Sun rising over the trees

Captain David had a GoPro attached via a retractable dog lead which enabled him to take some pretty amazing photos, including the Governor’s Balloon Safaris logo. These are then made available to everyone to download after the event. The flight took us over crocodile and hippo filled Mara River, forests filled with running impalas (and apparently rhino), then we eventually touched down on the Eluai Plains towards the Olololoo Escarpment filled with wildebeest and zebra. Spectacular bends in the Mara River Hippos in the river We learnt that balloon rides are awesome and a totally unique adventure. Our flight surpassed even our lofty expectations.

We also found out in a hurry that balloons can’t land ‘the right way up’… and bouncing along the plain can be difficult when there’s not one but two termite mounds on your landing strip. Tim and I with Captain David after landing

We’d like to thank Captain David for an eventual but safe landing and for a breathtaking start to an incredible day. If you’d like to learn more or book your own flight, check out the Governor’s Balloon Safaris website.

Next week we’ll be sharing with you the video of our flight over the Masai Mara and will also be bringing you some more flying stories as we continue our journey through East Africa and into Tanzania.

Check back next week.

Thank you to Julia’s River Camp and Kananga International for helping to arrange this experience. As always our opinions are always honest and our own. 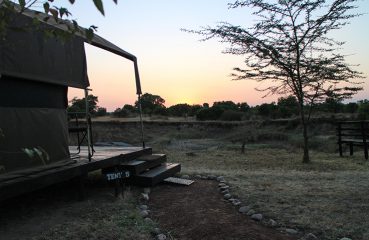 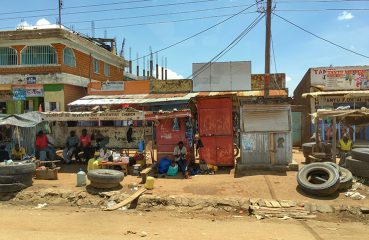