Written by The World in a Weekend| 27th February 2017| Africa, Tanzania, Weird & Wonderful 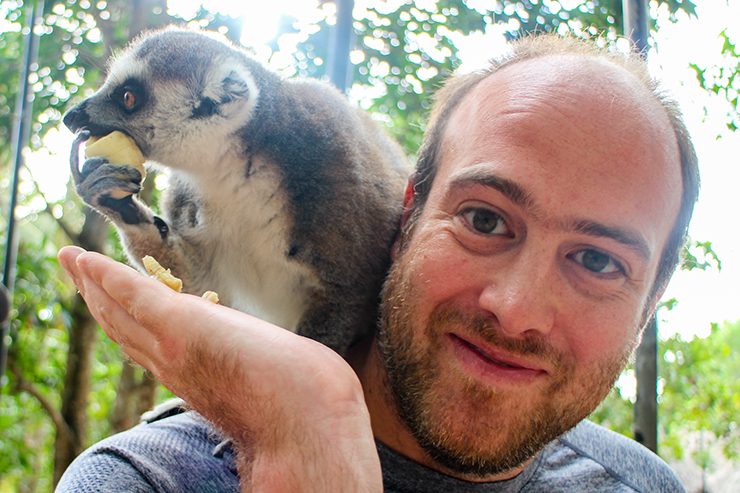 A footballing zebra, dinner with a lion and champagne with cheetah – Welcome to Cheetah’s Rock.

Of all the amazing things that happened to us on the island of Zanzibar… our day at Cheetah’s Rock stands alone as one of the most unusual, unique and incredible experiences we’ve ever had.

Initially I was dubious about going to Cheetah’s Rock. Rachel wanted to go purely to have some champagne with a cheetah… because that’s our particular brand of ridiculousness. However, I was reticent. After spending over a week in the Masai Mara and Serengeti amongst thousands of zebras, lions and cheetahs, why would we then go to a zoo to see them in captivity?

The Answer: Cheetah’s Rock is no zoo. It’s the anti-zoo.

We were welcomed to Cheetah’s Rock by a young man who handed us each a coconut and a very friendly domestic cat. I thought this cat was great. It was essentially an amuse bouche which would set us up for some more substantial cats later in the day.

Once everyone had arrived, we kicked off the animal fest with a zebra show. Chaka the zebra looking very pleased with himself

However, this is not the type of show that you might expect. There were no whips or drugs used on the animal and no sign of animal cruelty. Chaka, a Zebra, was led into the arena, let off his lead, and promptly performed a number of tasks at the request of his trainer, our tour guide, and the owner of Cheetah’s Rock, Jenny Amann.

Cheetah’s Rock does not identify itself as a zoo or a sanctuary, it doesn’t give itself a label either. The closest I could describe it as would be a wildlife school, the Hogwarts of the four-legged world.

Cheetah’s Rock trains animals through positive conditioning. Animals are asked to perform tasks and then are rewarded with praise and food. All animals are in large living spaces, are properly fed, able to exercise, and are never subjected to tranquilisers or drugs to subdue them or force them to perform. With Chaka the zebra

Our zebra had been conditioned to trust humans and interact with them. The men on the tour had the opportunity to kick a football around with him and then feed him when he brought it back it us. The ladies threw a rose and our stripped friend returned it to them… for the price of a tasty treat. Once the Zebra had finished romancing the ladies, we were off on a whistle stop tour through the other enclosures. We met and fed peacocks, dic-dics, turtles, monkeys, and ring tailed lemurs. My favourite moment was when we visited a couple of bush babies. Jenny asked us to smell the bush babies and describe their scent. As the bush babies moved around the room, eating our spaghetti offerings, we each sniffed their soft, oily fur and soon the visit became akin to a wine tasting evening. People started throwing out words like “zesty,: “citrussy,” “musty,” and “full bodied”.

Jenny soon put us out of our misery and gave us the answer:

I think she went on to give us more “fun facts” about the hygiene routine of bush babies (and potentially why) but I was a little pre-occupied coming to terms with the fact that I’d just taken a good drag on a urine soaked bush baby.

We moved on to the main event, as the name Cheetah’s Rock: the big cats. First up were the hyenas. Some more fun facts were offered, such as hyenas have the most powerful jaw in the entire animal kingdom… A fact that I was acutely aware of when we almost crashed our bus in the middle of a hyena nest and died. Jenny showed us, as evidence, a steel bowl one of the hyenas had chomped right through. I made a mental note: “that could have been my face” and then desperately tried to repress the whole thing.

Before leaving the hyenas Jenny asked us what should we do if we every got attacked by a hyena. There were a few guesses but we were soon put right: “climb a tree, hyenas cannot retract their claws and so cannot climb trees”. This would have been useful information a week ago. As we moved on Aslan, the white lion’s cage, Jenny asked the same question about lions. “Climb a tree?” was thrown into the mix again. But we soon learnt that if you get attacked by a lion, you should “just lie down and get eaten”. A lion is stronger, faster, bigger than you and can climb higher. If a lion wants to eat you, it will… Also good advice.

Originally visitors to Cheetah’s Rock could go into Aslan’s enclosure to meet him but, as he is now 2 and a half years old, he is becoming a virile young male and now sees tourists as a food source. Thankfully a cage separates you and Aslan but you can still get him to come, lay down, and feed him some steak. It’s an amazing and thrilling experience to be so close to a lion, but it’s probably as close as you want to get.

After Aslan had been fed we moved on to meet Tyson, the titular cheetah at Cheetah’s Rock. Tyson is a friendly cheetah and he learned that the best way to get treats is to sit on his wooden throne and pose for photos with tourists who are part petrified, part thrilled. Again, no drugs are used to sedate him, no restraints control him. Through years of positive conditioning, interaction and good treatment, Tyson has learned that some of these humans are okay, and worth meeting.

We’d strongly recommend you join this exclusive club of humans and visit Cheetah’s Rock if you’re ever on the island of Zanzibar. The tour is incredibly informative and you’ll leave with a host of experiences that are last a lifetime and are completely guilt free.

All proceeds of the visit go to keeping the great work going at Cheetah’s Rock and preserving the safety and habitat of these rare and wonderful animals. 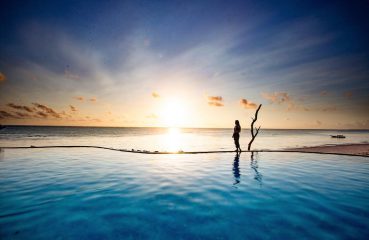 Most importantly – Does the hotel and room do what it’s supposed to do? Yes. The Pongwe Beach Hotel delivers what their name promises: Pongwe Beach. Whilst we have seen many... 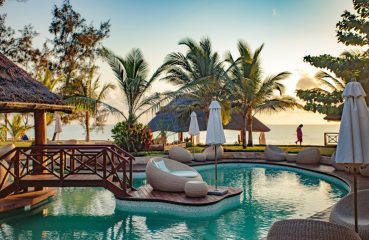 Most importantly – Does the hotel and room do what it’s supposed to do? Absolutely. The Tulia Zanzibar Beach Resort is a truly 5 star luxury hotel set in an incredible...

One Response to :
Cheetah’s Rock